Last weekend, I dropped by our ancestral home (father side) to visit my Lolo. It has been months since I last saw him so I was really looking forward to seeing him. He's doing well. Its good to know that he still enjoys watching noon time shows.
After that, I went to Glorietta to watch Inception. It was good. I never though I'd enjoy a sci-fi film. Well, this is a different type of Sci-fi. They said you have to watch it twice, even several times for you to be able to fully understand it. Perhaps if there will be another chance to watch it, I'll do it again.
Which part did I enjoy most?
The last part when he revealed the reason why he came back. Want to know what I'm talking about? Better watch the film ;)
In other news, we got it a car accident on our way home from Glorietta. Nothing major, but still it was so much of a hassle. 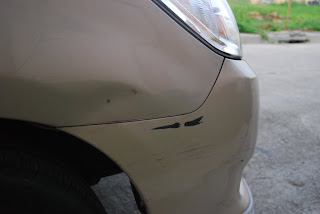 We were at Ortigas near Julia Vargas. We were turning right when a car tried to overtake us. He wasn't able to make it and hit u s. Totally an epic fail. And to add insult to the injury, he didn't admit that it was his fault even though it was already obvious. He is the perfect epitome of the Filipino saying, "Walang pinagkatandaan."
I don't want to dwell into that anymore.
To talk about my outfit, I was trying to embrace what was left of summer here in Manila. I wore white shorts from Arizona, pink lace up heels from Bangkok, a white tank top and a thrifted floral cardigan. 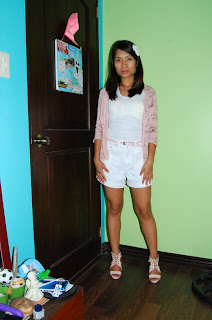 Another weekend's coming, I hope it will be great for us all.