The Over sized Sweater 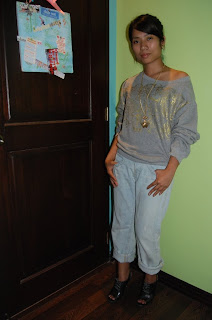 I'm such a delinquent blogger. As always, I was in the quest of a good outfit post. I wanted a shot of myself in the clothes I'm wearing out in the sun and not inside my room. Unfortunately, my schedule will not permit it. I leave the house early and I don't have time to photography my outfit. When I get back home, its already night time. Sadness.
Anyway, two Fridays ago, I went down south for a meeting. The meeting was held at ATC. It was the night of Train's concert that time. I arrived early so I still a have time to take a peek but I was to famished to do so. Instead, I opted to enjoy a McNuggets meal. What a trainwreck.
The meeting went well though. I'm spearheading the Thrifting Project. We will be selling clothes to raise funds for our project. I'm thinking of calling it EcoChic. :) What do you think?
By the way, I wore an over sized gray sweater with gold prints. It was supposed to be for the shop but when I saw the design, I knew I had to keep it or at least wear it. What's the design? Bunnies! Well, a twisted version because the body is of a snail and they're smoking. LOL. The pants, thrifted too. And the lace up sling back ankle peeptoe boots from Janilyn. I've had this pair for less than a year and the leather is already chipping off. The whole shoe is still intact though. I want to save it so badly but I don't know how. :(